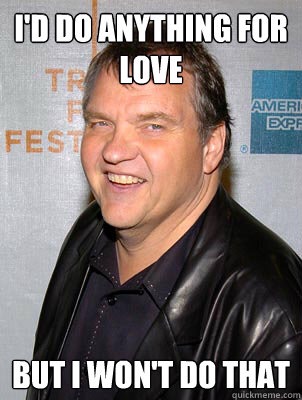 I am not embarrassed to admit that my all time favorite singer, next to Joe Strummer is Meat Loaf. No shame in my game there. I have been a fan going back to when I first heard Paradise by the Dashboard Light when I was about 8. Its been all downhill from there. One of the first albums I bought with my own allowance was Bat Out of Hell (the other was Give Em Enough Rope from the Clash). I played that album over and over and over on my little turntable in my bedroom. My grandmother was completely sick of it and wouldn’t let me play it on the “good” stereo in our wood paneled den. There was something about the acoustics and that paneling, it could make anything sound great. Once in a great while, she would take her smooth jazz or classical off the turntable and let me play Bat Out of Hell in that amazing acoustic space to pacify me. I’d sit on the old green floral coach, in a sweet spot between speakers and get lost in the music.

I know Meat Loaf wasn’t very punk, with the over the top lyrics, lack of anarchy or rage, soaring vocals and soap opera storylines, but I didn’t care. To this day, I listen to Bat Out of Hell I &II at least once a week each. I love to sing along to them for car karaoke. It brings out my inner Broadway superstar. Just call me Ms D, as in Diva. I’ve seen him in concert numerous times, and each time he delivers. The man is an old school showman. How he fits his catalog into a 2 hour show and leave all the fans happy is beyond me. However, my favorite songs are not necessarily the ones most people choose, so I don’t always get to hear them live.

My all time favorite Meat Loaf song is For Crying Out Loud, off Bat of Hell I. There’s just something so magical about it, and I imagine that it would be the perfect song for a slide show for a birthday or wedding…at least in my opinion.

At a close second is Hot Patootie, which technically is a Meat Loaf song, but is from the Rocky Horror Picture Show soundtrack. Back in the day, I used to be part of a group that did a Rocky Horror live audience participation. I played Columbia, so I got to be part of Hot Patootie each week. To this day, a quarter of a century later, I still know all the dance moves and audience participation lines. I can’t find my glasses or car keys, but I know this stuff…

Rounding out my top three is I Would Do Anything for Love off Bat Out of Hell II. This was his triumphant return to the world of Jim Steinman and boy was it awesome. I love the whole album, but this song is a masterpiece. From the soaring vocals to the question of what he wouldn’t do for love, I literally stop what I am doing and just listen when this comes on.

Not everyone shares my love of Meat Loaf. I do get a lot of strange looks when I profess my love for the dude, but they don’t know what they are missing out on. New material from him has been scarce the last decade or so, but I still have his back catalogue to play. My dream is that for my next big milestone birthday (or any birthday/holiday/Tuesday night) I get a concert with Meat Loaf. It doesn’t have to be private, just a show near my birthday. I think we can make it happen….

One thought on “Hot Patootie ”